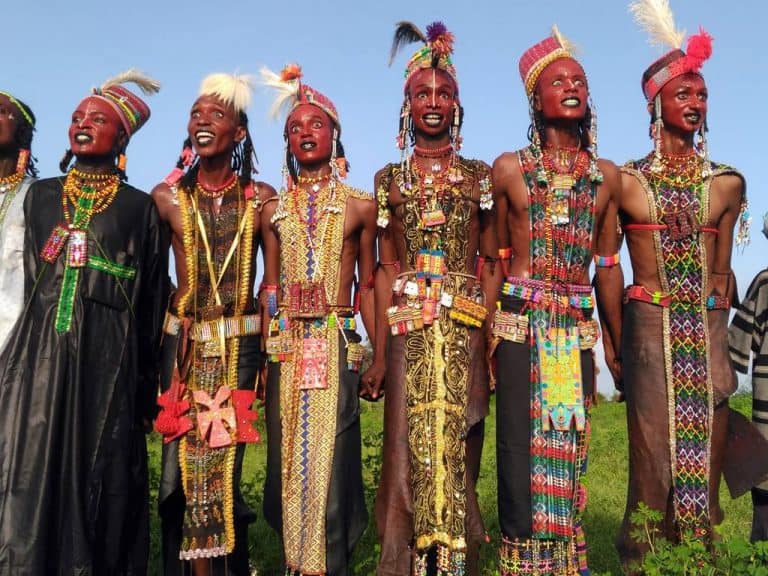 Every year in the Chadian Sahel, at the end of the rainy season, a spectacle of beauty known as Gerewol Wodaabe takes place.

In the south Sahara region there are one of the Africa's most enigmatic and interesting people: the Wodaabe or Bororo (Mbororo).

The Wodaabe are a subgroup of the Fulani (or Peul), an ethnic group that we can find in practically all the countries of western Africa as well as in Chad, Cameroon and now also, due to climate change, in the Central African Republic.

Wodaabe means "people of the taboo". They are governed by a strict moral and behavioral code called Pulaake, in which values ​​such as discretion, modesty, patience and strength prevail.

As we could see every year during our trips in Chad, the Wodaabe are an indomitable people who live entirely for their cattle, faithful to their traditions and they carry in their blood the love for the freedom offered by the nomadic style of life and the open spaces through which they travel constantly.

The Wodaabe people live in total harmony with the environment that surrounds them, which is admirable in these times, and they are characterized by being a peaceful and extremely hospitable community.

Towards Dourbali, we continue our trip in Chad

From N'Djamena we continue our journey to Dourbali in the region of Chari - Baguirmi.

September - October, end of the rainy season. Every year in the surroundings of Dourbali, about 120 kilometers from the capital of Chad, two large Wodaabe family clans (the Soudousoukai and the Japto) come together for an impressive beauty contest known as Gerewol Festival.

We are lucky, it's Wednesday and it's the market day in Dourbali, one of the most attractive in the region. Inside, the different ethnic groups of the region are meeting: Arabs, Kanoumoudji, Alidjam, Weilas, Hontorbe, etc. We attended a wonderful and colorful expression of their market.

After registering ourselves with the gendarmerie and submitting the authorizations of the Ministry of Tourism and the Minister of Interior, we continue our journey through sinuous tracks or sometimes just through the countryside for a few dozen kilometers until we find the family with the Bororo nomads.

On the way we could also see different camps of other nomadic ethnic groups. In addition to our partner in Chad, we were accompanied by two more local guides, one of them a Wodaabe chief.

Living with the Wodaabe nomads of Chad

We set up our camp in the savanna, in an immense open space covered with bushes and sprinkled with acacias, next to us only some nomad tents.

There are three essential reasons in the Bororo's life. The first one refers to the personal aspect, the second to their cattle and the third to the family and relationships with the clan.

The Wodaabe consider themselves the most beautiful people in the world.Men habitually wear turbans and tunics and are dedicated mainly to their cattle.

Meanwhile, with great curiosity, we observe that the Wodaabe women are unmistakable.

They dress with dark fabrics and are distinguished by their facial tattoos, large rings on their ears, bulky hairstyles, flashy jewelry and usually 2 braids on each side of the face that for them means a magical protection.

Wodaabe, the big group of nomads of Central Africa

Over the following hours more families were arriving with their flocks. On the backs of donkeys and the zebus: children, women and the elderly, traveled with their belongings. On foot, guiding the group, the males.

Once the place where the camp is chosen, the task of women is cleaning the place of weeds. They are also responsible for mounting the suudu. Young women and girls are in charge of searching water.

For the most beautiful people in the world, being handsome is an obligation. From infancy they are educated in the cult of their body, even from the birth of the babies all care is directed to improve their external appearance. As soon as the newborn is washed, the midwife shapes his head, trying to give it a spherical shape through gentle pressures; With equal care the nose and limbs are molded.

The Gerewol festival of the Wodaabe combines the three centers of attention of the Fulani, the beauty, the cattle and the family.

The afternoon falls and we begin to hear some chants, some men begin to gather. The rest of the families are not arrived yet, we are told that tomorrow it will be a great day.

The day drawns in the Sahel. While we prepare our breakfasts, the Bororo do the same. The first thing is to make fire to prepare the tea. From early in the morning men make their lives in their groups and women and children on other groups always next to the suudu or stores.

The Gerewol consists on a ceremony where men dance and compete to be the most beautiful and women are the judges and can choose their future husband.

For these dances, men prepare themselves with their best clothes and accessories, painting their faces red (Gerewol) or yellow (Yaake) and highlighting the eyes and lips of black makeup, which makes the white of the teeth and the eyes bright even more. During the dance men are arranged aligned, being the youngest those who are placed in the extremes. The dances and the songs are hypnotic and are repeated for hours and hours.

Polygamy in the Wodaabe

The Wodaabe practice polygamy, men can have up to four wives. But during these parties single girls can have an "affair" with some of the men without any commitment afterwards.

They say ... if a wife had a husband not so handsome, she could change her husband in the Gerewol or even just seek to get pregnant with a more good-looking man.

About this, it was this way may be in another period of time or in some other regions, because in this specific place, Islam is very influential, and it would be very surprising if that still were the case ...

Throughout the day men dance without rest, they only stop to drink tea and to eat. In the afternoon the Gerewol festival reaches its peak, the women attend the dances and they also dance as well.

As well, people from other ethnic groups or from small sedentary settlements in the surrounding area join the party. The party goes on all night long…

Similarly, at the end of the rainy season in Niger, a large Gerewol festival is held every year

In recent years, security problems in Niger have led many travellers to choose to live in Chad, one of the most spectacular travel experiences in Africa.

If you want to travel to Chad with us attending at Gerewol Wodaabe Festival in 2022, you can write to info@kumakonda.com 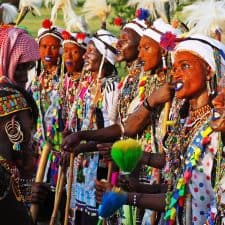 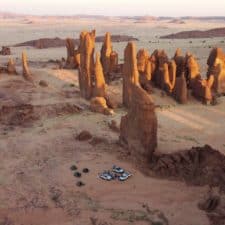