SEND ME MORE INFOrmation
Trips to Equatorial Guinea, one of the most unknown countries in the world. Historical heritage, nature and beautiful beaches await the traveller.

Equatorial Guinea: volcanoes, islands with stunning beaches, beautiful and inspiring Spanish colonial architecture, dense rainforests and good infrastructure.
Equatorial Guinea is a total stranger even to the Spanish themselves, despite having been historically, culturally and even sentimentally linked until just under half a century ago.

Trips to Equatorial Guinea, the great unknown of Africa

Trips to Equatorial Guinea to discover the sixth least visited country in the world. Although Equatorial Guinea is home to great natural beauty and an interesting historical heritage, it remains one of the most hermetic and invisible countries in the world. With an economy largely dependent on the oil industry, which has provided good infrastructure and a good standard of living for many of its citizens, the Guinean government has been promising for years to open up to tourism in order to diversify the economy. Realistically, this opening is a long way from materialising.

Situated on the Gulf of Guinea in West Africa and bordering Cameroon and Gabon, Equatorial Guinea was a Spanish colony until 1968. The country's sparse population of just over one million inhabitants has meant that much of the country is covered in dense tropical rainforest. The only wild animals you're likely to see in the country will be on restaurant plates or in city markets.

The country is divided into a continental zone and an insular zone formed by the islands of Bioko (formerly Fernando Poo), Annobon, Corisco, Elobeyes and adjacent islets. In our trips to Equatorial Guinea we will focus on the mainland and Bioko Island. Occasionally we may travel to Corisco to enjoy its beautiful beaches.

It seems simple, but the conditions change arbitrarily once the relevant documents have been submitted and the visa fee has been paid. The promise of visas ready in one day is not real and certain nationalities are vetoed and denied visas. This is based on our own experience with a group of international travellers. Although they say otherwise, letters of invitation are required and the traveller will probably have to wait about a week for the visa at the embassy in Madrid.

Back in time: Spanish Guinea

Equatorial Guinea was first a Spanish colony and later became a Spanish province. After independence and the subsequent electoral victory of the anti-Spanish Francisco Macias Nguema, the dictator Franco declared any matter or news related to Equatorial Guinea a reserved matter. This opacity of information about the country continues to this day, making Equatorial Guinea a total stranger to the Spanish and the rest of the world.

What is the main attraction of trips to Equatorial Guinea?

In our opinion the great attraction of Equatorial Guinea is the historical heritage that we find in towns and cities mixed with the great urban eccentricities that are being developed in the country. All this within an immensely beautiful landscape of jungles, wild coastline and volcanic mountains. Another highlight is the good roads and very acceptable hotels in most cases.

Malabo, the country's capital and oldest city. It is the start of almost all trips to Equatorial Guinea. The main tourist attraction in Malabo is walking through the streets of the old town in search of colonial buildings. The most characteristic and well-known is the Cathedral of Santa Isabel: from the late 19th and early 20th centuries in neo-Gothic style.

These colonial buildings begin to blend in with the new and modern constructions of the last few decades, creating a mixture of Western and African architecture. Opposite the cathedral, we find the Plaza de la Independencia, which stands out for the palm trees that cover it and which, together with the decorated columns, make it a beautiful place to rest.

Luba, a journey into the past

The old Hotel Jones of Luba, located in front of the port, is trying hard not to succumb to the passage of time and abandonment. There is no better way to start a visit to the city than from inside this old establishment. The name of the hotel comes from the surname of its original owner and founder: Maximilian Jones, a Fernandino or Creole of Liberian origin.

On the footsteps of the Jones and other "Fernandinos".

To talk about Luba, Bioko's second most populous "town", is to talk about the patriarch and businessman Maximilian Jones, whose bust stands on one of Luba's main streets. Among his most notable achievements is that he brought electric light to the town, taking advantage of the Musola waterfalls. Although rumour has it (perhaps with good reason) that Maximilian made all his wealth from the illegal slave trade, the truth is that he and other Fernandinos from Liberia and Sierra Leone were the real drivers and dynamisers of an economic and social prosperity that was reflected in houses, monuments, mansions, town designs and other infrastructure all over the island.

The former house of Maximilian Jones (1870-1944) in Luba, known as Patio Magazine, is one of the most interesting buildings of modern movement architecture in Equatorial Guinea.

Batete, the legacy of the Claretian missionaries

The village of Batete, formerly María Cristina, the name given by the Spaniards, is situated in the upper part of the southern massif.

A visit to Batete can be described as delightful. Strolling among colonial houses, religious buildings and cocoa dryers is marvellous. Without a doubt, the most interesting and unique building in Batete is the church of San Antonio María Claret. This Gothic-style church, built entirely of wood (now under restoration) dates back to 1922, making it the oldest church on Bioko.

The strong religious influence in Batete is still evident today, which marks the deep Christian upbringing of the inhabitants. In Batete, we discovered two impressive colonial buildings which are two missions with boarding schools. One belongs to the Claretian Missionaries where the future priests were trained and the girls' boarding school which used to belong to the Missionaries of the Immaculate Conception and is now in the hands of the Salesian Sisters.

Moka, the capital of bubis.

During the Spanish colonial era, Moka was the epicentre of agriculture, growing tomatoes, potatoes, beans, onions and many other crops that could not be grown in the rest of Bioko. Horse breeding was also developed during the colonial era. This favourable climate, more similar to that of Europe, meant that many of the upper class of settlers made their weekend or summer holiday homes here, and it is therefore very common to see various 20th century colonial style houses dotted around the town, mainly on the outskirts of the town. In the village, you can still see traditional constructions used for traditional celebrations.

A very interesting visit on our trips to Equatorial Guinea. The Sampaka Farm has been and still is an emblematic farm on the island of Bioko, founded around 1906, its colonial-style house of green wood and Nordic pine still refuses to succumb to the passage of time.

The name Sampaka comes from the name of Samuel Parker, who settled in the area when he left Liberia, and over the years, with the pidging, his name was derived from Sam Peik to the current Sampaka. The farm, whose extension was about 1,000 hectares, always stood out for harvesting one of the best cocoas on the island and in the world, both for its exquisite care in the selection and in its production process.

If you like picture-postcard beaches, warm water and palm trees, you will find a paradise on the island of Corisco. This is also true if you have been on an expedition from the Angolan desert for several weeks, as was our case in August 2022. In the summer months it is possible to see whales on the journey from Punta San Juan to Corisco.

Bata is the country's largest city, surpassing even Malabo, the national capital. Nowadays, after a demographic growth due to migration from neighbouring countries, Bata has become the most populated city in Guinea. Bata's most attractive feature is its spectacular waterfront promenade, which is lined with beautiful colonial buildings. Traditional ceremonies are held in Bata on Sundays and special occasions. The Mecuyo goes out in the streets of the city. If you're lucky enough, you might be able to attend this ritual, a blend of tradition and Christianity. 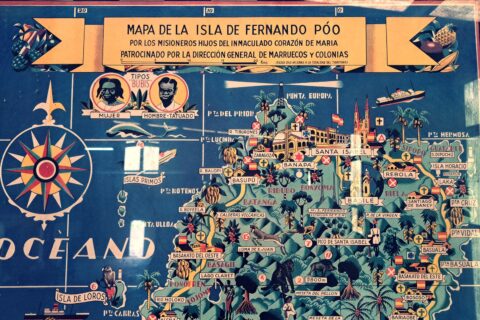 Trip to Gabon and Equatorial Guinea in August 2023