SEND ME MORE INFOrmation
Expedition overland tour to Chad visiting Ennedi massif and Ounianga lakes.
Chad is one of the most unknown and fascinating countries in the world. In this expedition we will travel to the Ennedi plateau and Ounianga Lakes
TRIP HIGHLIGHTS

A destination for unconditional adventure lovers, who already know other parts of the African continent and want to go further, living a fascinating travel experience, in the style of ancient expeditions, in an authentic Africa, where tourism has not yet emerged. On this Chad tour, we will travel to the Ennedi Plateau and the Ounianga Lakes (UNESCO), considered one of the most spectacular deserts regions in the world.

Chad is one of the least visited African countries, and our group and truck trip will take travellers through a territory almost completely isolated from the outside world.

We will camp in spectacular locations and have the opportunity to meet fascinating ethnic groups and travel through some of the most remote and unspoilt regions of the Sahara.  Welcome to the Chad experience.

In the northeast of the country, the sandstone Ennedi Massif has been sculpted over time by water and wind erosion, into a plateau featuring canyons and valleys that present a spectacular landscape, marked by cliffs, natural arches and pitons.

In the largest canyons, the permanent presence of water plays an essential role in the Massif’s ecosystem, sustaining flora and fauna as well as human life.

Thousands of images have been painted and carved into the rock surface of caves, canyons and shelters, presenting one of the largest ensembles of rock art in the Sahara.

The site includes eighteen interconnected lakes in the hyper arid Ennedi region of the Sahara desert covering an area of 62,808 ha.

It constitutes an exceptional natural landscape of great beauty with striking colours and shapes.

The saline, hyper saline and freshwater lakes are supplied by groundwater and are found in two groups 40 km apart. Ounianga Kebir comprises four lakes, the largest of which, Yoan, covers an area of 358 ha and is 27 m deep. Its highly saline waters only sustain algae and some microorganisms.

At 436 ha, Lake Teli has the largest surface area but is less than 10 m deep. With their high quality freshwater, some of these lakes are home to aquatic fauna, particularly fish. 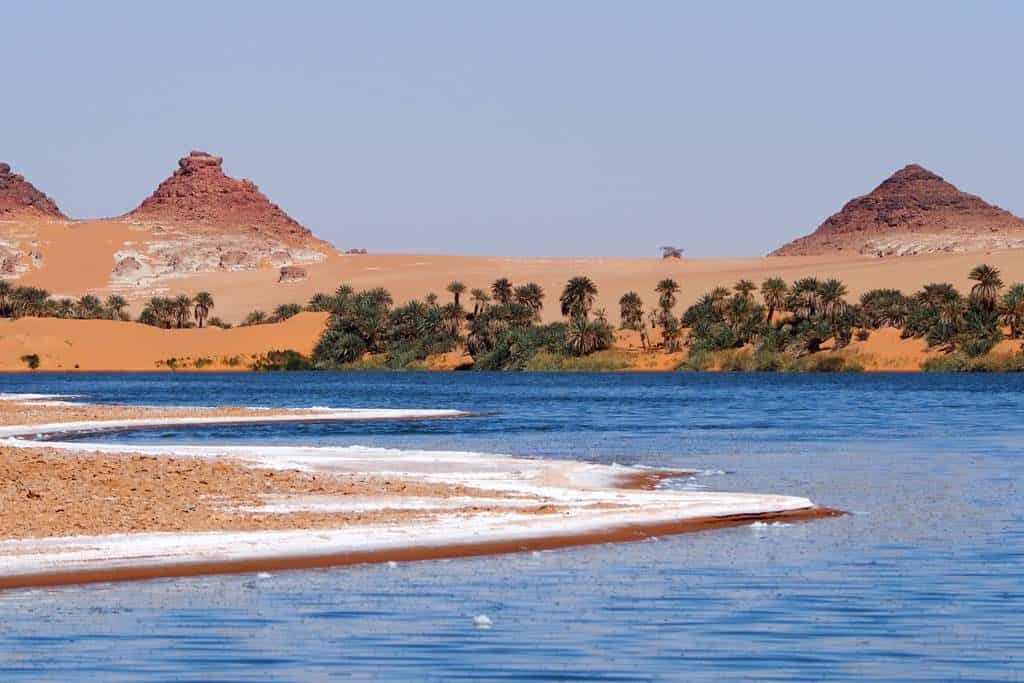 We leave behind the town of N’Djamena and head east through Massaguet and Massakory, where the asphalted road disappears. The view begins to change as we move from a mixture of savannah and sahel to a landscape increasingly arid in which vegetation becomes scarcer.

The first night will be in the surroundings of Moussouro.

We will pass through the city of Koubaolanga, a town that looks like another planet and from there we will cross a very difficult stretch of dunes, where we will drive without reference of any kind, we will drive through gigantic sandbanks and we will see other trucks that come with goods, fuel and passengers from Libya.

Before arriving to Faya we will find an area of rocks, there we will see remains of projectiles some of them without exploding and different types of artillery, remains of the war of Chad and Libya.

In Faya we will stockpile diesel oil and fresh food.

THIS TRIP DOES NOT INCLUDE