In the isolated northwest of Chad, some 1,000km from the capital N'Djamena, bordering Libya and Niger lies the wild Tibesti region, a remote 380km-long mountain range, which is the least visited part of the Sahara.

Very difficult to access and subject to travel restrictions, Tibesti was a forbidden region for long periods of time and off-limits to travellers. Today, it can be visited with due caution, the same caution you would take when travelling off the beaten track. We don't know how long this may last, so seize the moment! This part of Africa is one of the "last frontiers" left.

The most legendary Sahara

Tibesti is home to volcanoes, incredible rock formations, seas of dunes, rock paintings, canyons, oases and nomadic tribes. This region of Tibesti is also known for the settlements of gold prospectors, which are the source of many of its conflicts.

If Chad in general is adventure, Tibesti is challenge. We are convinced that there are very few places like this, practically unexplored and brutal, left on the planet.

At the base of the Toussidé Peak (3,313 m), the second highest volcano in Tibesti, one of the most spectacular places in Tibesti and Chad is the caldera of the Trou au Natron volcano.

The Trou au Natron caldera is 8 kilometres wide and 700 metres deep. The white stain that appears (photographs) at the bottom of the crater is natron (sodium carbonate), dissolved from the volcanic materials by water evaporating from intermittent rain.

The Teda herders who inhabit these remote landscapes of Tibesti grind the natron and mix it with the camels' food, supposedly to strengthen them.

Inside the crater of Trou au Natron there are also three spectacular dark cinder cones emerging from the white background. One of them, the most spectacular (image 2), is a perfect truncated cone 100 metres high. In the vicinity of these cones we find hot springs that indicate that there are still active volcanic remnants in the depths.

No one knows when or what the origin of the Trou au Natron was, whether a giant eruption created it, a subsidence or both. Deposits high on the slopes suggest that it once had a lake perhaps 500 metres deep, evidence of the dramatic changes the Sahara has undergone.

Trip to Tibesti in private; ascent to the peak of the volcano Emi Koussi (3.415m)

After the success of our prospective trip to Tibesti in 2019, in which we have built the logistical basis for future expeditions to Tibesti, we have prepared this trekking trip in which we will climb the highest peak of the Sahara. For this we have 4x4 support vehicles, which will take us from Faya to Tigui (base camp) picking us up at the hot springs oasis of Yi Yerra and dromedaries that will accompany us on the route on foot.

Known as the roof of the Sahara, the Emi Koussi volcano, at 3,415 metres, represents one of the most rewarding challenges we can offer our travellers.

It will take us a week to complete this route on foot, walking through a desolate and scorched landscape of lava rivers, crumbling rocks and dark gorges. In the midst of this terrible scenery we will discover oases and small villages, ending the route at a restorative hot spring.

Then in our 4x4 vehicles we will travel for 5 days through the desert and the Sahel to N'Djamena. 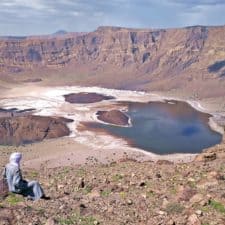 Trip to Tibesti, the most remote mountains in the world. March 2022