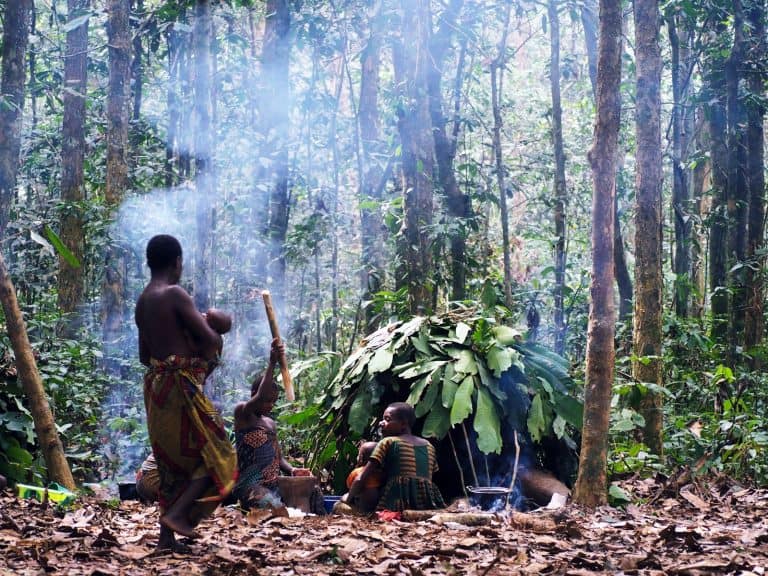 In this final part of the trip that we started in Chad four weeks before, we had not yet met one of the most interesting peoples and cultures in all of Africa: that of the Pygmies, particularly the Baaka or Baka.

Long before the arrival of the black Bantu peoples around 1.000 BC, deep in the equatorial forests lived the first inhabitants of the African continent: the Pygmies. They were always nomadic forest dwellers and knew no other world but the jungle.

Pygmies are one of the longest living people in the world thanks to the pharmacopoeia found in the forest. Today, some 5,000 pygmies live as they did thousands of years ago but not for long. Unfortunately, today they live in a fragile world, which is steadily dying out as a result of indiscriminate logging and also of expulsion from the forests where they have lived for hundreds of years.

The main characteristic of the different pygmy peoples of Central Africa is not, as it could be thought, their height, but rather that they are forest dwellers with a very primitive way of life based on hunting and gathering and a way of thinking and living that is opposed to the neighbouring Bantu peoples.

Scattered in numerous and different groups, we can find pygmy populations from the Atlantic coast of central Africa to Rwanda in the east of the continent. Although there are different groups of pygmies such as the Mbuti in the former Zaire (DRC) or the Aka, it is believed that they are all part of the same cultural group.

These unusual people have aroused curiosity and admiration since ancient times.

The image of pygmies has been found on the prow of Phoenician ships, on Greek vessels, on the mosaics of Pompeii and also the word Akka, one of the different pygmy groups, was deciphered on an Egyptian tomb of the 6th Dynasty.

We continue our trip through Central Africa, this time we get into the forest next to the Dzanga Sangha Reserve with several families of Baaka pygmies to learn about their culture and way of life.

The forests of southern Central African Republic and surrounding areas are home to an estimated 40,000 Baaka pygmies, who were here long before the ancestors of today's Bantus arrived from Congo-Zaire more than 300 years ago.

Challenges facing the Baaka people and other Pygmy groups

The Pygmies are a hunter-gatherer culture of nomadic or semi-nomadic tradition and have always lived in the forests of Central Africa. But the massive destruction of the forest, together with the nature conservation projects carried out by international organizations, have pushed the different pygmy peoples of Central Africa out of these forests, losing in many cases their habitat and their ancestral way of life.

In the Central African Republic, as in Cameroon or the Republic of Congo, we find different settlements of pygmies by the roadside. Sometimes these sites are located on the outskirts of some Bantu villages, becoming marginal ghettos.

Approach to the culture of the forest

In the southwest of the Central African Republic, around Bayanga, the gateway to the Dzanga Sangha Reserve, there are some populations of Baaka pygmies. Many of these Baaka, tired of being cheated by the Bantus, are beginning to lead a more sedentary lifestyle, based on subsistence agriculture.

Other families combine agriculture with more or less long trips to the forest to realize hunting, gathering and fishing tasks. But no one or hardly anyone lives in the forest permanently anymore. The tragedy happens many times, when we travel through the different regions of this part of Central Africa and we see pygmies living in Bantu populations in conditions of misery and slavery.

Even with all this, these Baaka pygmy families in the Central African Republic are still closely linked to the forest, to their ancestral culture and obtaining from it most of what they need for living.

Setting up our camp in the forest

We walk into the forest following the Baaka families. After half an hour walking we stop at a small clearing in the forest that they usually choose to set up one of their temporary camps. This is not a place chosen at chance, the camp is located near a river and in a place where there is abundant hunting.

The Baaka Pygmies are extraordinarily well adapted to life in the forest. We observe how women are in charge of the construction of the huts, called mongulu. Quickly and skillfully these women begin to cut down fine trees about three meters long that will serve as a base for the structure of the mungulu. On top of this structure, thinner branches are added, tied with natural ropes, and finally the entire frame is covered with large green leaves. And so, in almost the blink of an eye, the Mongulu of the Baaka families are ready.

For us to set up our camp, even though the tents are great and easy to set up, it would take almost even longer...

For the Baaka Pygmies, the jungle is a warm and pleasant place where you can get everything you need to live. When it comes to finding food, gathering is as important as hunting, although as we can see every time we stay with them in the forest, their real passion is hunting. Women carry large baskets on their backs, they are in charge of collecting medicinal plants and edible leaves with which to prepare sauces.

Daily hunting for food is practiced with bows and arrows, nets and also spears. Each hunting technique has its own organization: archers go forth in small groups of three or four families, while hunters with nets are grouped in six or seven families. Hunting with nets, as we observed in the Central African Republic, includes the collaboration of men, women and children.

We joined the Baaka on a hunting trip with a net. One of the families has a dog, a great help in this type of hunting. The first thing that comes as a surprise is the immense agility with which they move in the interior of the jungle, of course barefoot, behind them, clumsily, we follow them. The whole group knows well what they have to do and what their role is in the hunt.

The jungle and the spirit world

For the Baaka, the forest is their God. Within the jungle environment, animals have the same importance as men, so attacking any kind of life in the jungle is considered a bad thing. Pygmies do not conceive of killing more than a hunter needs for his livelihood. In this spiritual world, every beginning of a hunt is preceded by a ceremony. It is usual that during the hunt, if the hunter is not too lucky, a ceremony is also performed to chase away the bad spirits.

As we walk, women are collecting different plants, bark and fruits. Many of these barks, plants and roots are used to cure different pains and diseases. These are deposited inside the basket they carry on their backs.

Men go ahead trying to locate any possible prey or directly following it. It is common for animals to try to hide in dense forest areas. Around these parts of thick vegetation, the nets are placed in a circular way. The fenced space can be about 100 meters in diameter. Once the nets are placed and together, hunters begin to make noise and shout. If a prey is found inside the bushes, it is normal that it tries to escape to the outside, getting caught in the nets. The dog is very useful at this time also, since it helps the prey to "come out".

After getting a good reward, euphoria breaks out and the party begins. The chants and shouts make us assume that we are lucky.

For someone with a comfortable life like ours, where everything is as easy as going to a supermarket and buying "a la carte" whatever you want, ready to cook, the scenes that follow can be difficult to see. But it is something natural and basic: survival and alimentation.

While men smoke marijuana and they relax, women are in charge of killing, cleaning, cutting up and distributing the prey among the participating families. The partitioning is usually proportional. If the prey has been obtained thanks to the dog, this one will be able to enjoy the first one of the banquet, since usually it is given the testicles of the prey if it has been male. Also the family that owns the dog or the family that owns the nets will get a bigger portion at the time of distribution. Women, once again, keep the pieces of the animal wrapped in leaves, in the basket. We continue.

Honey collection and fishing in streams

Other activities that the Baaka pygmies usually do are fishing and collecting honey. During the honey harvesting season, it is men who are in charge of this task.

Women and girls are in charge of fishing. This activity is also carried out in a very archaic way. In a small stream, women block the water course with stones, branches and mud. Further down, in the small ponds that have formed when the flow is cut off, they begin to empty it with basins and with their own hands. Small pieces of fish and small crustaceans are trapped in the mud or hidden under logs.

Living together in the Central African forest with the Baaka pygmies

Between activities, hunting outings, fishing or collecting medicinal plants, we spend our time living with the Baaka in the camp. Their basic life in harmony with nature is absolutely fascinating. It is incredible to see their perfect adaptation to an environment as difficult as this, in which a person from outside the forest would not survive even two days in a row. They get everything from the forest, for them it is their God. A God seriously threatened. Perhaps we are witnessing the last throats of a primitive and admirable way of life that is coming to its end.

In the camp, women cook what they get from hunting and from the river. Men smoke marijuana and children play climbing trees. Some young women are encouraged to get a small tattoo. The night arrives and with the darkness the spirit of the forest. We attend in the dark a wonderful sensory and spiritual show, this time in the dark.

Trips in Central Africa with Kumakonda

In the coming years, Kumakonda is committed to continuing to explore and deepen this exciting forest culture. Starting in 2021 we will propose different outings in the Republic of Congo, Democratic Republic of Congo, Central African Republic and Gabon that will let us get to know the social realities of the different pygmy groups and other ethnic groups, as well as the invaluable natural heritage that these Central African forests contain.