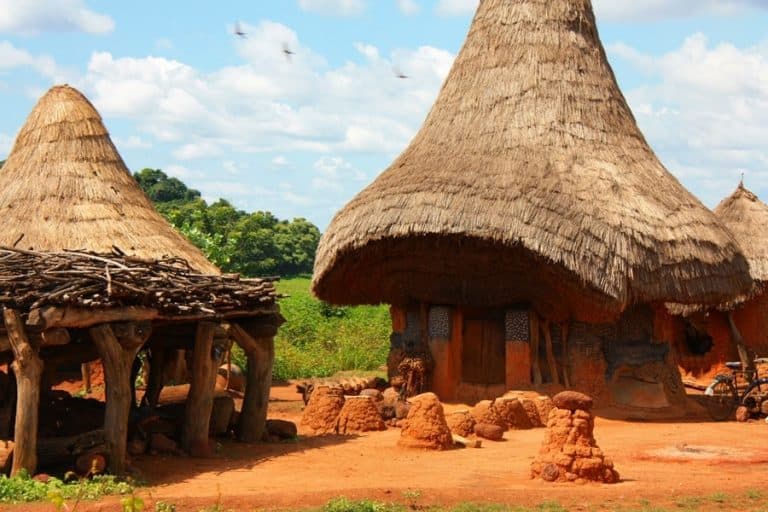 Niofoin and its fetish houses. Visit one of the most peculiar villages of Ivory Coast

In northern Ivory Coast, in the heart of the Senufo country, between Boundiali and Korhogo, lies Niofoin, one of the most interesting and picturesque villages in the whole country.

Niofoin is a medium-sized town that has grown a lot in the last years.  Mainly agricultural and animist, many of the ancient traditions are preserved and many of the inhabitants practice polygamy.

In Niofoin women and men live in separate houses. In a family where the man has several wives, each wife has her own hut and the man lives alone in his hut. It’s the woman who moves to the man's house when they want to see each other, and never the other way around.

This is a difference with the Dan people (also animists) that we visited in western Ivory Coast, where it is the man who moves to the woman's hut.

We go to Niboladala neighborhood, the origin of Niofoin, where most of the constructions are traditional style, that is to say, mud huts with thatched roof. Among the elongated and peaked mud barns, so typical in this region of Africa and the huts of the neighbors of Niboladaba, there are two buildings known as the "fetish houses" with their imposing thick straw roofs rising higher than the others

These two monumental sacred houses guard the two fetishes that protect the town; Diby and Kalegbin

The fetish Diby, also known as black fetish is the one who protects the village from their enemies. The main mission of this fetish is to send a thick mist avoiding the enemy's advance towards the town.

Undoubtedly this is the most spectacular construction of Niofoin. The size and thickness of the roof is due to the fact that being a sacred house it should never be left uncovered and instead of changing every year the thatch like the other houses (the straw roofs of African huts is usually changed every year or two to keep the waterproof effect), what they do is add one more layer each year.

The Diby fetish house has the privilege of being yearly the first to receive its straw cover in the village and every neighbor of Niofoin should provide some straw before changing the roof of their own home. The number of straw layers overlapped on this sacred house could give us an idea of its age.

If we look closely the house we will see on the walls some carving sculptures that represent different deities, and at the door there are animal’s skulls and strange hoops. The local guide told us that these hoops where the necklaces of dogs that have had the "privilege" of being sacrificed in honor and gratitude of the Diby fetish.

Tree of the word

Next to this fetish house we find another construction known as Kafounda, the "tree of the word" where many of the problems or conflicts of the inhabitants are solved. We also see another house very close, in which only the notables and the highest positions in the secret society have access. Many of the animal sacrifices are carried out there.

Our last visit in Niofoin leads us to the other sacred house of the town, home of the Kalegbin fetish, in charge of protecting the population in case of evil spell, malediction or disease outbreak, etc. This fetish would also have the power to attract and cause rain.

We leave Niofoin with the impression of having known a very ancient and traditional way of understanding spirituality and worship and with these images of the impressive constructions of the fetish houses, undoubtedly some of the most surprising in West Africa.