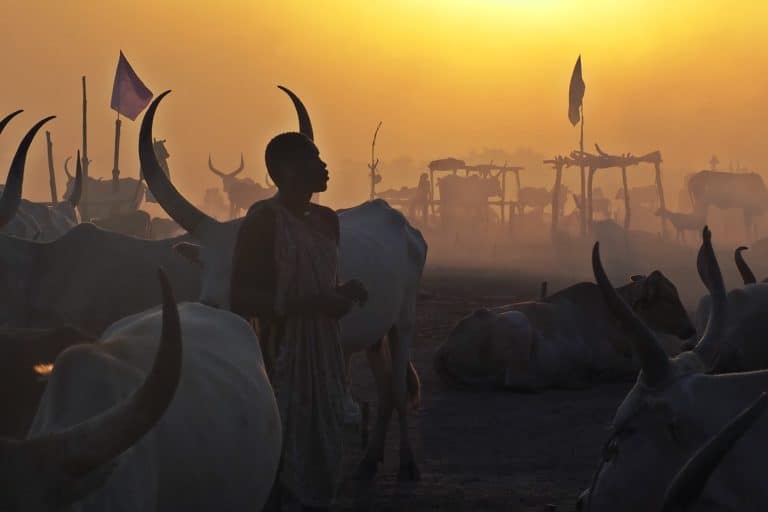 Trip to South Sudan, visit to a Mundari cattle camp

December 2020. We continue our journey to South Sudan, we do it heading north of Juba, following the course of the White Nile, in search of the famous Mundari cattle camp

The Mundari are a small ethnic group of Nilotic origin, consisting mainly of cattle herders and farmers. The Mundari are known locally for their tribal body and facial markings (scarification), as well as for their interest in traditional fighting. They are also known, especially internationally, for their nomadic cattle camps, widely captured by renowned travel photographers.

The tribal lands of the Mundari people are traditionally located east of the White Nile, about a hundred kilometres north of Juba, the capital of Southern Sudan, and are concentrated in the city of Terekeka in Central Equatoria State.

Until recently, this short distance meant a hard journey of several hours. Today, it is possible to reach Mundari territory in just over an hour.

We are in the dry season, usually at this time of year, Mundari cattle camps are located along the banks of the White Nile. But this year is different. As a result of the excess water everywhere, caused by heavy rains and flooding in July and August, the Mundari have set up their seasonal camp next to the new road from Juba to Terekeka, much further south than in other years and away from the Nile. Let us remember that the Mundari inhabit a flat territory, easily subject to flooding.

Cattle, the centre of the Mundari universe

In few other places like the Mundari cattle camp, you can see the perfect communion between cattle and people.

The Mundari, like other pastoralist groups in Africa, live by and for their cattle. But it could be said that these animals are more than just a way of life for the Mundari. The relationship transcends into the spiritual.

For the Mundari, cows represent many of the great values of their daily lives such as love, commitment, tradition, sustenance, food and stability. Livestock gives status to each individual Mundari. It is therefore not surprising that every member of the Mundari cattle camp tribe knows every animal perfectly and is cared for even more than a person.

Everything you need to live

From their cows, the Mundari get milk and blood, one of their main foods. Rarely is a head of cattle slaughtered for its meat.

The cattle's urine serves as an antiseptic and they wash their heads with it. In addition, the ammonia in the urine makes the colour of the Mundari's hair reddish or orange.

Cattle feces are used to make smoking fires that will keep the thousands of insects in these swampy areas away.

For the Mundari the cattle is therefore their source of life, and they understand it as a connection between them and their gods, using it also in the ceremonies of union between a man and a woman, in which the husband's family will have to pay the dowry, in heads of cattle to the woman's family.

In return, each Mundari dedicates most of his day and life to the care and attention of his cattle.

Known for its large and thick horns, which can measure up to one and a half metres, the Ankole Watusi breed traces its origins to the Nile Valley up to 4,000 years B.C. Traditionally for many of the region's different ethnic groups, the Ankole-Watusi were considered sacred. They offered milk but were rarely used for meat, as the wealth of their owners consisted of the number of live cattle as was the case with the Mundari.

As evening falls, activity returns to the Mundari camps in South Sudan. The cattle return after spending the day grazing, the young people stoke fires made from the animals' droppings so that the smoke keeps the insects away.

We watch as the Mundari massage their cattle with ash, and do so with affection and care. This powder applied to man and cows, mitigates insect bites.

The ropes are prepared to tie up their cattle while other members of the group set up the beds where they will spend the night with their cattle.

And the sun comes down slowly and that is when the backlights create an impressive dense atmosphere, making Mundari cattle camp a magical and very attractive and visually stunning place