South Sudan, the youngest nation in Africa, formerly known as Equatoria, is a country rarely visited by travelers but where it is possible to make excellent ethnographic routes in the mountains bordering Uganda and Kenya, visiting villages with very well preserved traditional cultures. In addition, Southern Sudan has good national parks, such as Boma, one of the largest in Africa, where the largest annual migration of wildlife is concentrated.

The vast Boma National Park could be more than enough reason to make a trip to Southern Sudan. Herds of over a million gazelles and antelopes probably outnumber the Serengeti's wildebeest herds, making it the largest wildlife migration on earth.

From March to June, animals move south and east from the flood plains of Sudd National Park and Bandingilo to Boma and Ethiopia. During the dry season, from November to January, the sense of migration is reversed. The herds return in search of the rich pasture nourished by the flooding of the White Nile.

The towns of Torit and Kapoeta, on the easily accessible axis of the route that connects South Sudan with Kenya (Juba - Nairobi), are a great base for exploring the different ethnic groups that inhabit the region. North of the capital Juba, on the banks of the White Nile are the different Mundari and Dinka camps

In the southeast of South Sudan, near Uganda, lies Mount Kinyeti, which is almost 3,200 meters high and is the highest peak in the country. We are in the Imatong Mountains, home to several Nilotic tribes. One of these peoples live between the Imatong Mountains and the adjacent plains are the Lotuko. The main religion of the Lotuko people is based on nature and ancestor worship. Their main occupation is raising livestock, supplemented by subsistence farming.

Boya Hills and the village of Larim

Considered one of the most traditional ethnic groups in Southern Sudan, the Larim are known to be excellent architects. The Larim live in the Boya Mountains, hills dotted with beautiful villages of traditional architecture. Like many of the neighboring ethnic groups, the Larim engage in pastoralism and subsistence farming. Their religion is also based on ancestor worship.

The Toposa are an ethnic group of shepherds with a strong warrior tradition often involved in cattle theft and even in these times they remain distant from globalization and western influence. In the Toposa villages we can see how their inhabitants continue to wear traditional clothes and make scarifications all over their bodies.

Mundari camps along the White Nile

North of the capital Juba, along the fertile banks of the Nile, live the Mundari. The lifestyle of this semi-nomadic pastoralist village revolves around their prized cattle, the Ankole. Cattle for the Mundari is everything: status, source of income and the dowry with which they will get married.

CNN article about the Mundari

Next trips to South Sudan

Next trip to South Sudan in April 2021 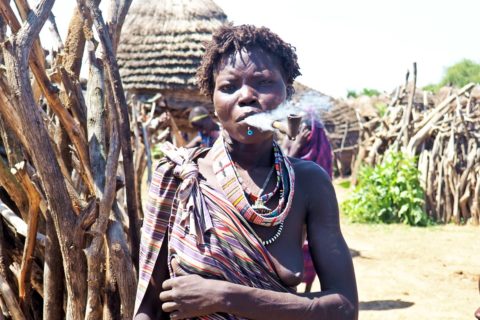 Tour to South Sudan, an exciting 24-day trip in December 2021