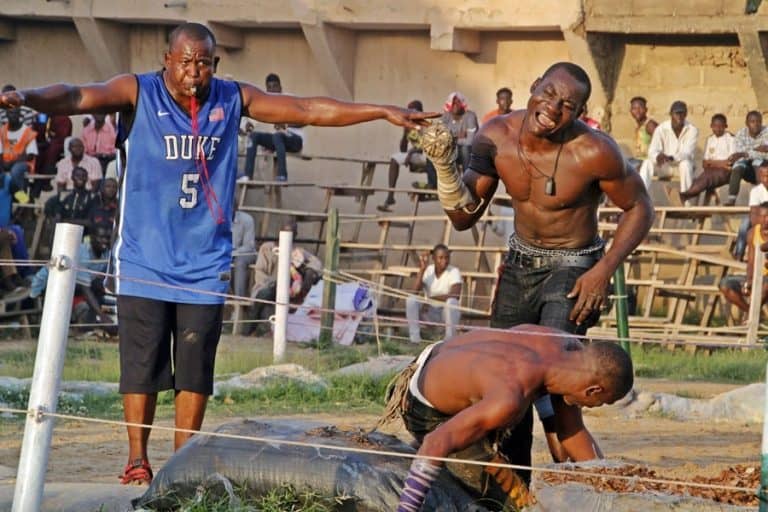 Austerio Alonso
Co-founder of Kumakonda. Passionate of Africa. Specialist in the design, preparation and realization of expeditions in Africa. Content creator.
Dambe. Welcome to the Fight Club.We travelled to northern Nigeria, specifically to Kano, the oldest city in West Africa.
After making some visits, an inhabitant of the city told us about the boxing evenings that were held every afternoon in Kano, we decided to return to the hotel and organize the visit to one of these hausa

After asking several people, we finally had an address to go to. After a while we climbed a tuk tuk and went through the streets of Kano, we were very curious about it.
As soon as we arrived at the entrance to the premises, a boy sold us the tickets, and then he introduced us to the promoter of these matches who arranged us in a good place so that we could see and record the combats comfortably.
The combats take place outdoors, on the sand, accompanied by the sound of the drum amplifiers and the shouts of several "speakers". Street vendors, nail cutters, etc.
We were surprised to see an area reserved for women, perhaps the rostrum, because it was the best place.
The fighting was not started yet, but we were convinced that it would be one of the most important experiences of the trip in Nigeria.

With three centuries of antiquity the Dambe is a form of traditional boxing associated with the Hausa people that mainly inhabit the north of Nigeria, in the south of Niger and in the southwest of Chad, in West Africa.
Although there are many young people in the cities who, looking for prestige, money or just for fun, they immerse themselves in the Dambe world, even today.
Most of the Dambe boxing fighters still belong to the caste groups of the butchers Hausa ,a caste considered inferior, which in the twentieth century traveled to rural areas in the harvest season where the corresponding parties were held, looking for a fight with the locals as entertainment.
Dambe was also traditionally practiced as a way for men to prepare to go to war. Many of the techniques used in the Dambe refer to war.

Skills and practice of Dambe

Dambe wrestlers wrap one hand with a cloth and then with a cord that is tied tightly on the arm. The wrapped hand is used to hit the opponent until he falls to the ground or surrenders.
Here in these games, practically everything is worthwhile, although we saw that the ages and the sizes of the opponents are similar even in the combats.
As we have understood, many young people have died in these combats, where few are the rules or the limits. Even in former times the bandages of the fist were covered with broken glasses. Now it is illegal. But after having traveled through Nigeria, I am not so sure that they do not practice.
Most combatants carry amulets, seeking protection and luck. Many perform rituals before and after their battles. The show is simply brutal.
There are few rules established in Dambe boxing, one is that each fight consists of three rounds, with no time limit, and the looser is the one who falls to the ground, the one who puts the knees on the ground or the one who surrenders. Shooting the opponent is called "killing him", in the Dambe everything incites violence, we are in the Fight Club.
You can kick and even, as we saw, put your fingers in the eyes of your opponent if the occasion arose.
A wild experience, in a trip to Nigeria, hard and difficult country but without a doubt very interesting and essential to visit.
Loading...
Scroll to Top