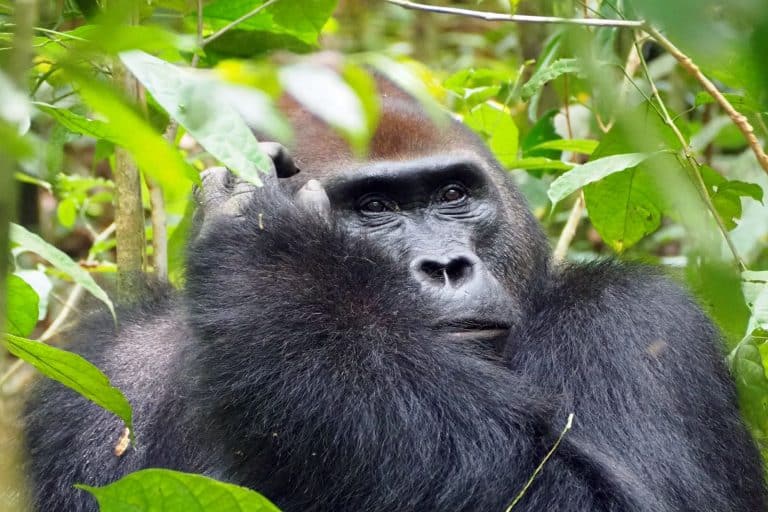 We continue our overland trip in Central Africa, this time the focus is on the sighting of western lowland gorillas and forest elephants.

The Dzanga Sangha reserve, the third highlight of the trip, is possibly the best place to see gorillas in Africa central. We will also seek to get closer to one of the most interesting cultures of the continent: one of the Ba'Aka people

Crossing the Touburo border between Chad and Cameroon took considerably longer than expected. The guys at the Chadian customs must have thought that we were suspected of transporting some kind of illegal substance or product, so they gave us a complete check of the truck that lasted about three endless hours under a sun of justice and maybe that's why they forgot to dismantle the truck's roof rack. There was no luggage or nook and cranny of the truck that escaped their inspection. I suppose there are few things worse than a young man in uniform wanting to play the big shot in front of who knows who. This time, unlike other borders, it was not a question of money, it was only a question of hierarchy.

Our journey through Cameroon was simply a long transit to the Central African Republic. Cameroon is known as Africa in miniature, a very interesting country that has a complete variety of landscapes and ecosystems, as well as interesting ethnic groups and some good national parks where you can see wildlife.

The Rancho of Ngaoundaba is a perfect multi-day stopover when travelling from the south to the north of Cameroon or vice versa.

For us it was a necessary and essential rest after several days of hard travel through southern Chad. The pleasant walks in the mountains around Ngaoundaba Ranch, the comforting swim in the beautiful lake together with the great home-cooked food there, made us charge our batteries enough to undertake the rest of the trip to Dzanga Sangha.

As in Congo or Gabon, in Cameroon huge corridors have opened up through the forest, where hundreds of trucks drive from the sawmills to the ports, transporting the huge logs taken from the Central African forests. A tragedy of dimensions that can only be known when seen first hand.

Where the maps do not show roads and the APPS on our mobile phones say that there is no route that is only forest, it is possible to drive along the wonderful tracks that have been created in a record time by the timber industry.

Through one of these tracks we reach Libongo, located on the banks of the Sangha River and the border post before entering the Central African Republic.

The Sangha River and its tributaries were for a long time an important communication route in the region.  This river connects the town of Nola in the Central African Republic with Cameroon and the Republic of Congo, where after 750 kilometers it joins the Congo River.

Until very recently, the Sangha was used by boats for the transport of goods of all kinds, since until 1973 there were no roads in this part of Central Africa. Even today, the Sangha River is still an essential part of the life of the inhabitants of the area.

This river runs through a luxuriant tropical forest and has a very variable depth of between one inch and 5 meters, depending on the season.

We have just left our truck at the Gendarmerie and after completing all the border formalities and selecting the necessary things to spend the next 4 days at Dzanga Sangha, we head towards the Libongo pier.

It is dry season and the boatmen who come to pick us up at Libongo (Cameroon) warn us that the river flow is very low and that due to the large sandbanks that stick out of its waters the trip will take longer than usual. It has not rained for several weeks, something very unusual in this part of Africa, even in the dry season.

We enter a lowland forest that is home to an enormous diversity of wildlife, especially in mammals, but also in birds, with about 380 species.

The botanical inventory of the forest is very rich, with many plants used by the Baaka pygmies for medical purposes.

This is an immense and practically intact forest, shared by three countries: Cameroon, Republic of Congo and Central African Republic and part of it, forms the tri-national Sangha Park.

Again this beautiful camp located by the Sangha River will serve as a base for several days to visit the Dzanga Sangha Reserve.

Comfortable rooms, running water, a restaurant-bar with a wonderful view of the river is all we need to rest from the whole challenging journey behind us. A trip that started more than 20 days ago in the capital of Chad.

Why do we think it's the best forest reserve in Central Africa?

Because it was such a big group, we had to make two groups. One was at Dzanga Bai and the other was at Bai Hokou to meet the gorillas and the mangabais, the ones who visited the gorillas were divided between Mata's family and Makumba's family, the two silverbacks who live in Bai Hokou with their respective families. And the next day the visits were exchanged.

One of the best experiences you can have in Africa is to see a family of wild gorillas.

Every traveler can visit western lowland gorillas or mountain gorillas, depending on the country and the national park to which they are traveling.

Most travelers choose to visit mountain gorillas in the Virunga Mountains, a succession of extinct volcanoes bordering the Democratic Republic of Congo, Rwanda and Uganda. Virunga is a home to just over half of the mountain gorilla population. Another major option is to visit them in the Bwindi Impenetrable National Park in Uganda.

Where to visit Western Lowland Gorillas?

More unknown and less visited are the Western Lowland Gorillas, but their encounter is no less impressive.

The Western Lowland Gorilla is the most numerous of the four gorilla subspecies in existence, with an estimated population of between 100,000 and 200,000 individuals. This is a figure that no one knows for sure since it is practically impossible to count them because of the vast and dense areas they inhabit.

Some of the best places to visit them are

As for the difference in price of visiting western lowland gorillas vs. mountain gorillas, the balance leans positively towards lowland gorillas. Whose official visiting fee is around 300-500 USD, compared to 700 USD in Uganda and 1500 USD in Rwanda. All these permits include one hour visit with the gorillas

Some basic differences between lowland gorillas and mountain gorillas

Mountain gorillas live, as their name indicates, in higher areas, are larger, have longer hair to protect them from the cold temperatures they live in and have shorter arms. Their diet consists mostly of grasses.

Western lowland gorillas normally live in groups of 5 to 10 individuals, although there are exceptions such as the Doussala habituated group in Gabon, which consists of about 15 individuals.

Their diet consists of different seasonal fruits, plants and herbs and is much broader and more varied than their mountain cousins.

Unlike mountain gorillas, western lowland gorillas like to stay high up in trees and forest clearings, where one of their favourite herbs grows. The group is composed of a dominant silverback and several females along with their young. The stiff competition for food makes it not uncommon to find solitary individuals temporarily or permanently leaving groups, something that only happens in western lowland gorillas as mountain gorilla groups are much more cohesive.

Visit habituated gorillas in Africa, what does that mean?

Very easy, if there were no groups of gorillas habituated to human presence, it would be very difficult or practically impossible to sight them. Gorillas, like the vast majority of forest mammals, flee as soon as they sense human presence. And if they don't run away, as sometimes happens with elephants, buffalo, chimpanzees or gorillas, they can lead to unpleasant encounters, in which humans always have the upper hand.

During the habituation process, the gorilla, chimpanzee, mangabei or any other primate will gradually get used to the human presence.

During the observation, the habituation team will take notes on behavior, diet or health. This habituation process, which takes several years of work and daily contact with the gorilla group, has the risk of influencing their behaviour or transmitting diseases. This habituation is necessary for the study of these primates and for the financing of the reserve through the income generated by tourism.

To avoid generating too much stress to the gorillas, visits in Dzanga Sangha and other national parks in the region are usually reduced to a maximum of 3 or 4 people per group and a maximum of two groups per day.

No one knows the forest as well as the Ba'Aka people, and they, along with the scientific team, are in charge of this five-year habituation work.

In the Dzanga Sangha Reserve there are three groups of habituated gorillas. Two of these groups are in an area known as Bai Hokou, close to the border with the Republic of Congo and two hours by 4x4 from the entrance of the reserve.

The Bai Hokou is home to the visitor's welcome centre and serves as a base camp for the logistical operations of this part of the Dzanga Sangha reserve.

We focus on the two groups of gorillas living in Bai Hokou: the Mata and the Makumba familys.

While Makumba is a quiet "silverback", Mata, fresh from its habituation process, still offers the visitor a good dose of adrenaline, as it is usually noticed when one approaches its territory.

This time I decided to visit Mata's group and I can assure you that I lived one of the most brutal experiences that have happened to me in Africa, extremely positive, by the way.

As a complement to the visit of the lowland gorillas in the Bai de Hokou, you can see a huge group of mangabais also habituated. This group is composed of more than 200 individuals. It is a highly recommended visit, because if luck is on your side, the visitor will be surrounded by dozens and dozens of mangabais who are delousing each other, playing or practicing a complete Kama Sutra.

Since I took it easy the day before and stayed resting at Doli Lodge, which made me feel great after the hard journey. I was able to recharge my batteries enough to sign up for the trekking route that goes through the different "bais" and salt flats of this part of Dzanga Sangha, all of them beautiful places where it is possible to find elephants, buffalos and gorillas as well.