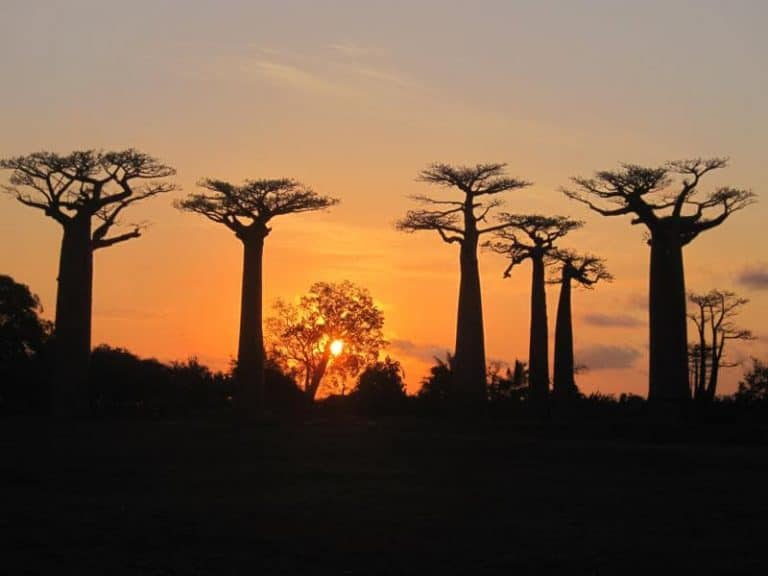 Widely extended over the African continent, majestic, impressive and monumental, the baobab has earned a level of respect that few species in Africa can match.

It is believed that baobabs in the continent have their origin in Madagascar, from where some seeds floated up to Africa, where they gave place to different species that under ideal conditions can live up to 4.000 years, resulting fascinating. But baobabs are not only incredible because of their longevity, also because of their dimensions, especially the trunk. It is known some Zimbabwe’s specimen where even 40 people have fitted inside.

In some African villages their hollow trunk is filled with water and it’s used as water container, where more than one thousand liters of water can be stored. Its appearance is fascinating, and there are many myths and legends that you can hear across a trip in the continent, some of them tell that an angry god threw a baobab from the sky and it landed upside down. Other stories tell that a devil pulled up a baobab and fixed its branches in the ground in a fit of rage.

It is, moreover, remarkable to note baobab’s adaptation and resistant capacity which enables them to be so long-lived. If the bark is peeled, it will grow again, and if it burns, it can recover. Because of their size, only an enormous elephant might bend these wonderful and majestic trees.

Unlike the majority of trees, amazingly baobabs have more uses alive. Some of the countless uses are, the manufacture of resistant ropes with the internal bark, also fibers are obtained for networks and mats. The fruits are used as floats in the fishing networks, the rinds of the fruit, rich in proteins, are in used for feeding the cattle.

With seeds is made a valuable oil used to smooth the mud objects. Even more, with the fruit of the baobab, delicious desserts and drinks can be done. Besides material use, in many African villages some copies are sacred, as this one on the picture, in Banfora's region in Burkina Faso, where even a guardians' family guard this tree during generations.

Beyond myths, legends, uses, and spectacular presence, it is thought that the baobab will become one day the most important tree species of the world due to his aptitude to absorb carbon dioxide.